How do I get rid of Algae in my Pond?

An important part of garden pond maintenance is keeping the water healthy and relatively free of pond algae. Algae make the water look green and murky and it can grow on rocks and on the edges where it can be an eyesore. Excessive algae growth is not only unsightly; it is somewhat unhealthy for other aquatic life in the pond.

The two most common kinds of algae that occur in ornamental ponds are suspended single celled algae that cause pond water to appear green and murky and string algae which tend to grow on rocks and pond edges. 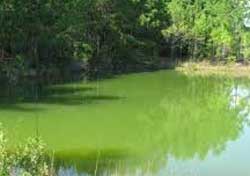 Like other pond plants, algae need sunlight and nutrients in the water to grow. If there is plenty of both and little competition from other aquatic plants, then algae will take over a pond. Control of algae growth is best started by keeping the pond ecosystem in balance. Usually this is done by making sure the pond bottom is free from debris as much as possible, not over feeding your fish, having a bog or even a filtration system to battle the excess nutrients in the water that algae loves.

At the start of the season you may want to use Barley. It comes in many forms such as bales, pellets, and even extract (a liquid form). Where ever water is flowing like beneath a waterfall or inside a skimmer is the best place to put your barley bales or pellets for the most effectiveness. The barley will break down and release a safe chemical in the water to help prevent algae from occurring.

In some cases, you may still need some help. A UV clarifier may be necessary to help control the algae. A UV kills only single celled algae. Water goes into the clarifier where it is exposed to UV light that kills the algae and makes it sticky and then it will clump together. UV's can be used either inline, in some skimmers such as the savio skimmerfilter which can house its own uv, or a pressurized filter that already has a UV inside it making it very convenient.

There are safe chemicals such as Algaefix. However you must follow the correct dosage and never go over it. Did I say never go over the dosage? Just making sure. It's better to under dose than overdose. When a chemical such as Algaefix is entered into the pond it starts to work immediately. When this happens algae starts to decompose and if there is a great deal of algae in the pond it can starve your fish quickly from oxygen and you may wake up to a nightmare of dead fish. When using such a chemical it is best to use it in the morning and not on a really cloudy day. Green Clean is mainly used for string algae and is an oxidizer which actually adds oxygen into the pond.

One of the safest and natural ways to combat algae is by using beneficial bacteria. The bacteria will go after the causes creating the algae not algae itself. However the process can take a while, 30 to 60 days and most pond owners are not patient enough. Aeration will help multiply the bacteria for a faster result. Without aeration results can be slow and a higher amount of bacteria may need to be used. Never under dose when it comes to beneficial bacteria. Even though bacteria are a win for the ponds health, it may not always be enough to get the job completely done.

An air pump is recommended and will aerate the water keeping it oxygenated and healthy. It not only helps with algae issues, it can make a difference with water clarity, give extra oxygen during the hot summer days but also keep an opening in the ice during the winter for gases to escape.

Adding plant life into your pond is a win situation for many reasons. As water plants will take up nutrients in the water, essentially becoming competition for the algae. Certain plants like water lilies that float on the surface, shade the pond water which reduces the amount of sunlight that enters the water and slows algae growth.

Pond algae growth is an issue for most pond owners and keeping it under control is important for maintaining the health of garden ponds. A combination of keeping the pond ecosystem in balance by adding beneficial bacteria, using a UV Clarifier and an air pump will help keep pond water in peak condition.